It is a fact that, when children hit a certain age, they start being full of questions. Ma sha’Allah. This might range from a regular amount of curiosity about the world around them to levels that require their parents to take some sort of medication (only joking!).  In fact, I spent the first couple of years of Y’s life wishing for that phase to kick in, as he was my first child, he learned to speak very late and was not very communicative. Alhamdulillah, I was not disappointed. He is now 8 and has been a continuous source of questions for years. Allahumma baarik. I love that. But I hate that the pace of our daily life often means that not all questions can be given the attention they deserve. Even the ones that appear to be quite pointless are a sign of a healthy sense of wonder about Allah’s creation, as well as an valuable exercise to a young mind in terms of research and self-learning. I remembered coming across a post about a “wonder wall” from Nurturestore and decided we must have a wonder wall of our own, at least to literally pin down all those sparkles of interest until we have the time to sit and find an answer. Sometimes I write Y’s questions down myself and stick them there, because he has already run off to play… but I think I would also like to know why hot dogs are called that (which would also help to convince B that they are not made of dog’s meat!) 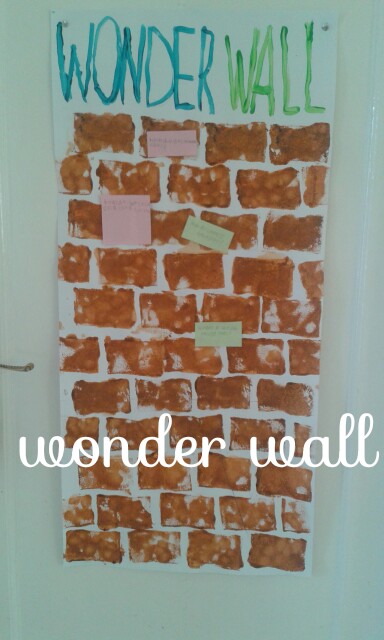 This is what it looks like at the moment. Some questions have been already taken down, the post-it was glued and the answer written down on a simple answer sheet. All answer sheets are kept in a binder and ordered alphabetically according to the main word of the search. Y had a big smile on his face when I compared this to a “home made encyclopaedia”, and I might have been aiming slightly high… for sure it is the world’s slowest encyclopaedia to put together, but very good fun. And, for starters, the hot-dog issue is sorted, alhamdulillah. 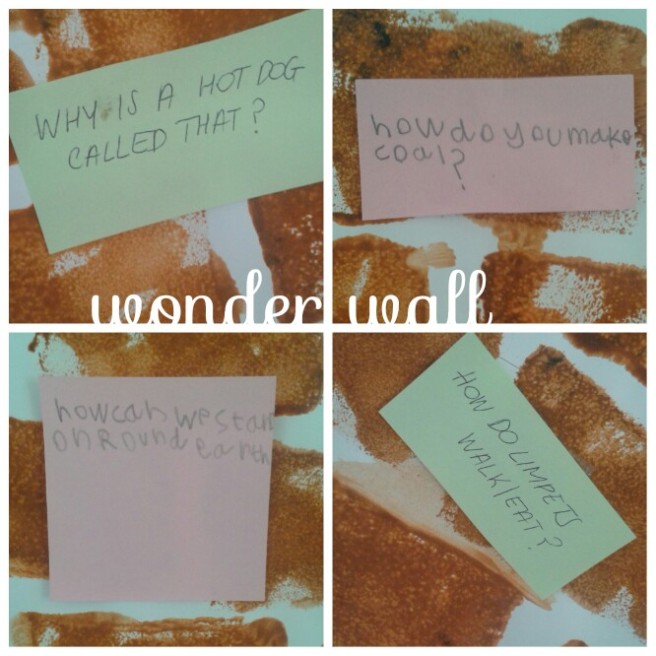 A week ago we were blessed to travel to Birmingham to attend the “Hereafter” conference at Masjid As-Sunnah An-Nabawiyah. Alhamdulillah, it was very beneficial (may Allah bless the speakers, organisers and everybody that helped in it).Incidentally, it also delivered an important lesson to me about what I can and cannot do and about accepting the – few and moderate – restrictions that pregnancy is imposing on me. In other words, we couldn’t stay until the end but we are slowly catching up on the talks we missed (click the image to listen to the recordings:)

The environment at the conference was lovely masha’Allah and it really felt like a blessed sitting, but one thing stuck with me. When I took a break for some fresh air (during one of the talks… erm… see what I said above about restrictions…) I noticed there were a lot of children of various age groups playing and generally hanging out outside. It felt strange to see the sisters trying their best to keep babies quiet and toddlers entertained during the lessons, while some older children and teenagers were outside, not benefitting. I am sad when during jumu’ah or ‘Eid prayers I see sisters coming in and immediately “settling” their children – from toddlers to teenagers (some of whom look not far if at all from the age of accountability) handing out iphones, tablets and other gadgetry. Children should be taught from their very first visit to a masjid or a lesson how they should behave in that environment. Of course, they might take a while to learn, but the effort from the parent needs to be there. Encouraging them to “kill time” does not teach them to sit quietly while the khateeb is talking, not to run around during salah and not to chat with their friends but to try to listen and benefit from what is being said. If we read the biographies of some of the major scholars, we will find that they were accustomed to sit in the gathering of knowledge of adults from an early age. And they sure weren’t handed an ipad to play some “educational” game on. Let’s try not to short change our children and to have the highest possible expectation that is appropriate to have for their age.

Of course I did not expect Bilal (who is 4) to listen to the talks at the conference, but I expected him to sit still, entertain himself quietly (with colouring, tracing, stickers, washi tapes and a little notebook, books, etc. which are not the same as giving him my phone to play on, because these are real, creative, tangible, beneficial activities), to whisper if he needs to tell me something and not to bother me (and others) with continuous requests for snacks/drinks/more entertainment/unreasonably frequent trips to the toilet (I’m sure anyone who has kids can tell when they don’t actually need it, right?), because Ummi needs to take notes.

My 7 year old sits with the men  (at shorter events, such as jumu’ah, the little one does too). I don’t only expect him to sit quietly and not to be a nuisance but I expect him also to listen and benefit as much as he can, to start learning how to be a member of that congregation. Now, I know he needs help with listening and following, so I gave him a “word search” to do, with a lot more spaces to tick every time he hears one of those words in the talks. Also a couple of lists to compile (the major signs of the Day of Judgement – which he missed – and some of the different names of the Day of Judgement, which he did very well masha’Allah).

Alhamdulillah,  we are always very excited to take part in these events, both boys have been delivering lectures since *smile* they have been Abu Fulan and Abu Fulan, they talked about whose beard was longer (masha’Allah) and how their beards will look Insha’Allah.  Yusef reads out parts of the matn of “al-Waajibaat” (by shaykh Muhammad ibn ‘Abdul-Wahhaab) in Arabic and English, and he expects me to take notes (“Where is your notebook Ummi?… you can make a spider diagram if you want…”). Well, Ummi needs to take notes, doesn’t she?

For a long time I thought about introducing a reward system connecting certain types of age appropriate house chores with money, but struggled to find the right format. Then I came across an ice-cream cone reward chart for toddlers on Pinterest (https://uk.pinterest.com/pin/397935317045719021/) and immediately loved it. It isn’t just cute, it is perfect for a boy who is still too small to read (and will still be for a while) as well as his older brother, it goes on the wall neatly instead of sitting on my kitchen counter where it could easily be knocked over (I had considered using jars with marbles), it doesn’t require much printing and did I already mention it is so cute? I want one for myself, for when I am a good insha’Allah. Plus I got to use my craft papers and laminator, which is always great fun.

The idea is not that children should be paid for contributing to housework. It is their duty to pitch in and I do not believe they are entitled to payment for it per se. However, I want to encourage them and to create good habits, insha’Allah. I want them to learn to be responsible for whatever money they have, to chose how (and if) to spend it and to know where it comes from, insha’Allah. Also, I chose some specific jobs they dislike to do. I am not going to reward Bilal for washing the dishes or Yusef for reading, for example, because they love it and they would do it for hours given the chance… the list I put on the chart is not exhaustive and I do add things as they come to my mind. I might even do the opposite: restricting the reward if an ice-cream scoop only to a specific job they are particularly adverse to(i.e. Yusef taking off his clothes neatly or Bilal dressing on his own, as he can get lazy about that).

So far it is working well, Alhamdulillah. My husband said I’ve been too generous by putting £5 as a target… Yusef is already almost there… I was stuck for an amount to put, I didn’t want to be too liberal with it but also I wanted to give something they could realistically spend in an amount of time that wouldn’t be so long they would completely forget what they are doing and why. But the prize awarded might be modified as we go along. 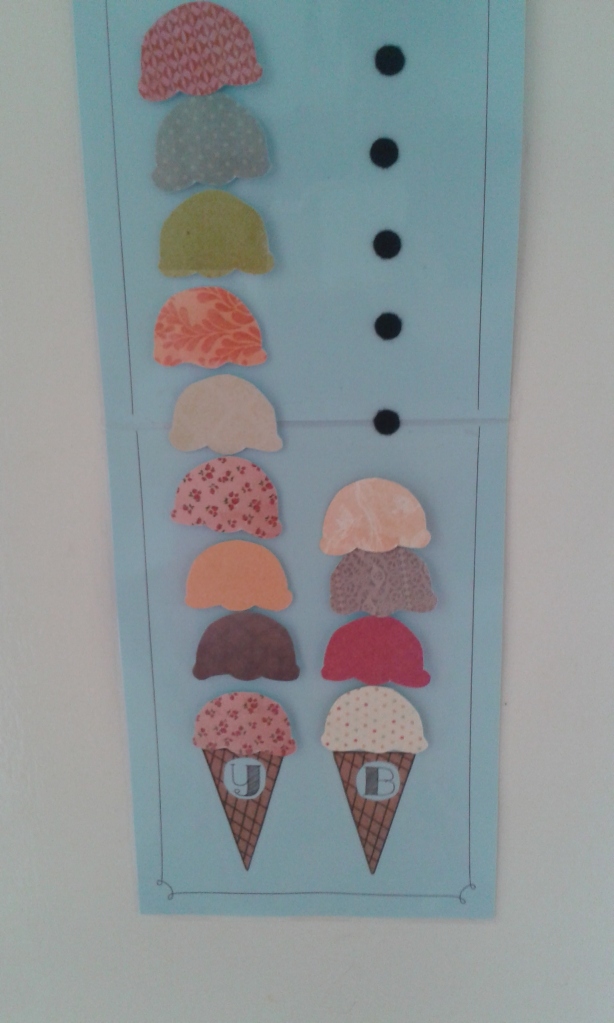 Assalamo aleykum and welcome to this blog, where I intend to share things I do with my 2 home educated boys (and new baby girl) and how - with the help of Allah - I attempt to raise them Muslims upon the path of the Salaf us-Saalih. The true Islamic way: between excess and negligence; far from insurrection as well as from seamlessly blending in with the non Muslim society around us. Please don't expect perfection, you won't find any in here... and may Allah guide us all!